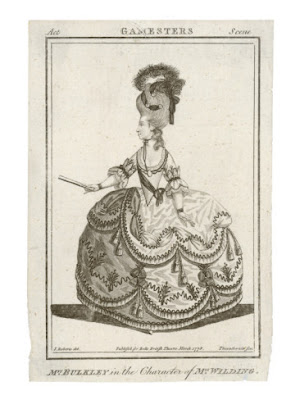 Mrs. Bulkley , who is a relation ot the late Mr. Rich, patentee of Covent Garden theatre, played all the former p:irt of her life at the house to which (lie may be said by right of inheritance to belong, and has only been one season at Drury Lane. She is mistress of an easy address, and has very much the manners of well bred people. Her speech is articulate, but her voice is deficient in power, and has a hardiness of tone; (he manages it however with great art. Her figure is elegant, of the middle size, and though she is neither * exceeding young or handsome, gives her a very pleasing appearance on the stage. Her talents have always made her a favourite with the town as an actress; and perhaps it is solely the defect of her voice that has kept her from being a performer of the first eminence in tragedy, as well as comedy. We have heard Mrs. Bulkley, when the house has been attentive, deliver Portia's celebrated speech on mercy in the Merchant of Venice, with so much propriety and feeling, that she has obtained universal applause. But a good voice ii one of the most necessary requisites of a good actor, the want of which, genius itself can scarcely supply. Colley Gibber, who was certainly a proper judge of these things, fays in his apology, " So strong, so very near indispcnfible is that one article of "voice in forming a good tragedian, that an actor may want any "other qualification whatsoever, and yet have a better chance for "applause than he will ever have, with all the skill in the world, "it his voice is not equal to it." Nor Oiould Mr. Cibber have confined his remarks to the tragedian; the comedian of humour must at least have a loud voice, and he who personates the lover or the man of sensibility, should likewise have a sweet one.
In the dearth of tragical actresses which has predominated lately at Drury Lane theatre, (Mrs. Siddons excepted) Mrs. Bulkley has been occasionally called upon to assist at the sacrifices of Melpomene; and though the reason we have just given, would not permit her to act as high priestess, she has held up the tragic muse's train with great decency. Her chief merit, however, consists in performing characters of a different kind: the coquet, the well bred or the fine l.idy, where the passions undergo no violence of agitation, and where ease and propriety are the great requisites, these afe the parts in which the most excells.
Gepost door bulkley op 12:04